Last night I went out for drinks with friends. We were talking about food. And for some reason we spoke about pumpkins and all the fantastic things you can cook with them. So I told them I will share this amazing recipe. But now I found out that butternut squash actually really is a squash and not a pumpkin! The Dutch name is ‘flespompoen’ which means bottle pumpkin. So who would have thought?! Doesn’t matter, it is still super tasty and I use it a lot in cooking! 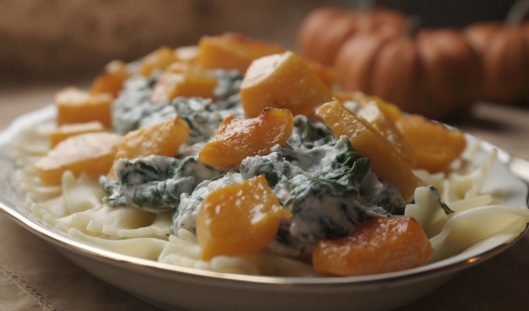 Preheat the oven to 200°C.
Put the butternut squash cubes on a baking tray covered with a baking paper. Drizzle over a bit of olive oil. Roast in the oven for about 20 minutes, or until soft.
Cook the pasta and drain.
Heat up a bit of oil in a large, deep pan. Add spinach little by little and cook until it’s all shrunken. Remove access water. Add the ricotta, sour cream and parmesan cheese and heat through. Season with nutmeg and salt and pepper.

Serving: Scoop up pasta on each plate, pour the spinach sauce over the pasta and decorate with the pumpkin cubes.